Being bisexual and femme, maybe I ask these questions more than many other queer people would. Or maybe it's just me. It's true that I spend much of my time in a fairly heteronormative world. Most of my closest friends are straight. I belong to a book club where I'm reasonably sure I'm the only one who's queer.

Even though I'm at ease in the wide world and pretty much myself no matter where I am, it's probably true that I am most at home and most myself among queer people. There are things I can talk about with queer people that aren't usually, shall we say, topics of polite conversation. At least not among most women. I love the openness with my queer friends. I love the freedom.

And yet sisterhood is not automatic. I've been at queer events where I felt very much the outsider because I wasn't already hanging out with one or more people. Cliques are not a heterosexual thing. We are not always one big happy queer family. Having one thing in common, even if that's a pretty big thing and much broader than just who one finds attractive, does not mean there are not other barriers.

I have made a lot of new connections since last Pride. It will be interesting to see how strong they are. I'm hoping for a good Pride! I'm planning on having fun and being fun.

There's a lovely backup even if Pride isn't what I might hope for: the Vancouver Queer Film Festival. That really does feel like one big family among staff members, volunteers, and film goers. I'm very much looking forward to that.
Posted by Véro B at 18:32 4 comments:

Our home on native land 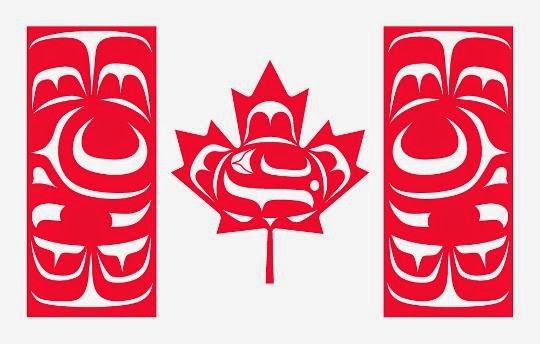 Hardly original, but very much on point on this Canada Day, the 147th anniversary of Confederation.

Hanging out with younger people, not just in Femme City Choir but also in and around Girls Rock Camp Vancouver and other activist groups, has made me more aware of political issues that I had previously either overlooked or not taken seriously enough. I have always been liberal, but liberals can sometimes exist in a bubble of privilege. There are times that I think the kids go too far, and not always with wisdom, but that's how I was at their age too. And they are a whole lot better informed than I was. They have plenty to teach me.

So let's talk aboriginal land rights. I'm proud of the recent decision by the Supreme Court of Canada that the Tsilhqot'in First Nation holds title to its traditional lands in central British Columbia. The decision is firmly grounded in constitutional law and precedent, all the way back to the Royal Proclamation, 1760, which stated that the only legal way for European settlers to live in British North America was to negotiate land rights with those who held title. Two hundred fifty years later, the SCC finally said flat out that a great deal of the land non-native people are living on does not belong to them.

British Columbia is an especially egregious example of this, since so few treaties have been concluded here. The City of Vancouver made a recent acknowledgment that the land the city sits on is part of the traditional territory of three First Nations, none of which has ceded the rights to that land. It's a start.

So although I'm proud to be Canadian, and I do celebrate the birthday of Canada, I'm feeling a little subdued. We can't continue to ignore land claims. We can't continue to pretend that native people don't have rights to the land we occupy. We can't continue to act is though our ancestors did not colonize land that was never legally alienated from its rightful owners. If King George III and his government in the 18th century understood that, surely we can too.

We can't turn back the clock. We can't undo hundreds of years of history. Descendents of settlers and immigrants are not going to head back to Europe and Asia and Africa. But we must find a way to move forward together, not as colonizers, not by imposing power, but in a way that respects most especially the rights of those who were here before us.
Posted by Véro B at 18:02 No comments: