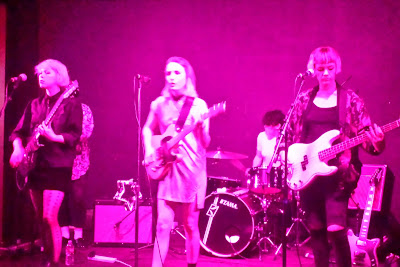 It's not that the shine went off Seattle. It's only that ever since we started making the longer drive to Portland, we have tended to head back there more often than to our much closer neighbour. But our last two quick trips to Seattle made us realize how much we missed the city. So when I discovered that PINS, a band from Manchester, England, that I love, would be touring only as far as Seattle and not to Vancouver, I proposed a long weekend to Sweetie. I did not have to twist her arm.

We made one disconcerting discovery right away. It used to be possible to book decent Seattle hotels for a reasonable amount of money. No longer. The cost of nice places where we have stayed have suddenly leaped to several hundred dollars a night. Even hotels we know are decent at best have gone out of reach. We thought we might have to make this a trip where we drove down and back in one night. Thankfully, Airbnb came to our rescue. We found ourselves a lovely place on Capitol Hill for two nights for an amount we were willing to pay.

The nice apartment was also in a particularly good part of Capitol Hill, on the slope that leads to downtown. Lots of stuff nearby, and lots more not far away. One thing not far away is Sitka & Spruce, a fantastic farm-to-table restaurant in a little complex of shops (bottle, meat, sandwich, and more) owned by the same company. We've been to plenty of "fresh, local, seasonal" restaurants in Vancouver. They are among our favourites. But I think the chefs and owners might want to pay a visit to Sitka & Spruce. They're doing some really innovative, flavourful things. Morels on a big chunk of grilled sourdough bread with sherry cream and an egg yolk on top! That was just one of the fantastic dishes we had.

Dinner was early and the show we were going to wasn't until later, so we walked up to Broadway to check out Sweetie's old 'hood (when she was in grad school at U Dub). Some things are the same as we remembered—Annapurna Indian Restaurant, the Rite Aid drug store (the one with the old movie theatre marquee), the QFC supermarket, but so much else has changed. We have since learned that the huge construction project east of Broadway just south of E. John St. will be a light rail station connecting to the U District, Downtown, and SeaTac Airport. And there are many empty storefronts on Broadway. We walked by a restaurant and said aloud, "Is that where Minnie's used to be?" A couple eating outside said, "You're the third people walking by who've said that." We got a good laugh out of that.

Later it was time to head to the SoDo Lounge to see PINS. That was a bit of an adventure. The SoDo Lounge is south of Safeco Field, where the Mariners play. Sound Transit got us to a point east of the stadium, maybe a mile from the club. We wended our way through a mostly empty land of bus and train stations and huge highway overpasses, skirted past the stadium (where there was a game on), and finally made it to our destination. 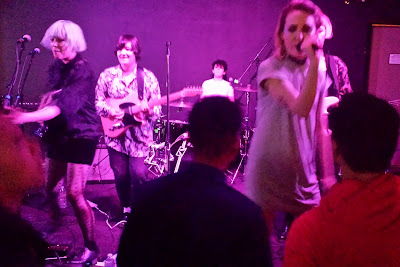 The SoDo is a newish room, a bit sterile but with clean bathrooms (an advantage of new, sterile clubs) and overpriced drinks. It's a good-sized room, and sadly only a few dozen people made it for the show. Shades of the Electric Owl last fall. I'm beginning to think I'm a jinx for this band! But just as then, PINS played a great show, and the people there were enthusiastic. After the show we chatted with guitarist Lois (whom I had met in Vancouver), drummer Sophie, and bass player Anna. They are the nicest people! I feel bad that I was drunk when I had intended only to get a buzz on. I probably did not give the best impression. I'm sure they put up with drunken fans, but I don't want to be that fangirl.

I felt much worse the next day. You know how we say, "I can't drink like I used to"? That's a real thing. This was way beyond a hangover. Nasty headache, unrelenting nausea, and a lethargy that kept me from moving very far from the bed. A stupidly wasted day. I finally asked Sweetie to Google "alcohol poisoning." It wasn't that, of course, but she found "alcohol intolerance"—the kind of thing that is often genetic but that also sometimes develops when you get...old. Ugh. But the best thing was that she found a remedy—chicken soup. Seriously! I needed to get myself up and out, so I slowly wandered to a convenience store and got a Cup o' Noodles. The combination of ramen and chicken-flavoured broth (and seemingly not too much MSG) was magic.

Later, with me cured, we headed out to the Egyptian Theater, now run by the Seattle International Film Festival. We saw The Wolfpack, a great documentary. Check it out. We then did a kind of Broadway nostalgia tour and ended up at Pagliacci Pizza for slices and salad. Not quite the dinner at Altura that we had had to cancel due to my idiocy, but still fun.

We finished our weekend on Sunday morning with a great breakfast at Glo's Cafe. The place is tiny, and even fairly early there was a wait (it was Father's Day after all), but the food was worth the wait. I had an eggs benedict variant with bacon, spinach, and grilled tomato that was very satisfying. The hollandaise was outstanding! And they were generous with the hash browns. We also discovered a great habañero sauce (for the hash browns) called Secret Aardvark, which is apparently from Portland. We bought a bottle to take home.

We were sad to leave, but we have already booked the same Airbnb for early fall. The owner gets two thumbs up from us! We will still be back in Portland, of course, but it was nice to get reacquainted with Seattle and with the changing Capitol Hill neighbourhood. And next time we will make it to Altura and the Seattle Aquarium!
Posted by Véro B at 11:46 No comments:

I have a choir-shaped hole in my heart. This has been a difficult entry to write.

This past weekend, Femme City Choir put on two fantastic shows at the York Theatre in East Vancouver. I think we did our best shows to this point. I loved the repertoire, and we used more arrangements created by our musical director, who is a brilliant arranger. The band and the singers worked very well together. The solos were great! I got to sing a duet on the first verse of "Dreams So Real" by Metric (I love Metric) which then turned into a sextet to finish the song. It was glorious.

The Saturday show was also my last official show with the choir.

It was a difficult decision to leave. In many ways, I really did not want to. Choir has been both enjoyable and useful for me. I love the people involved in it. I love how much we have improved in less than two years and through growth from about 15 to more than 40 members. Choir has been very good for my singing voice and my breath control. And every Thursday evening, choir practice was an excuse to wear something nice. It's femme choir, right?

If time were infinite, or at least more plentiful, I probably would not have left. But at some point during the last couple of weeks, I realized that I had not touched my guitar for longer than I could remember. I had scribbled some lyrics and actually finished a couple of songs, but they were almost flukes, because I hadn't really been working on them. I had barely practised with my drummer and partner in V+T, our duo.

I am also now involved in another volunteer activity that it important to me, and that takes time and focus as well. And I have new plantings to tend. And cooking to get better at. And books to read. Something had to give.

It's sad for me no longer to be a part of the choir for musical reasons, but at least as much because of people. Being the social critter that I am, I fear losing connections. I won't be at practice every week. I won't automatically see a lot of these lovely people. I only hope that the connections I have formed will endure. There are definitely people I don't want to lose touch with. Farewell ("fare thee well") but not goodbye, I hope.

I also have to make sure not to get lazy. When you're part of something like the choir—someone else's band, in a way—you're like an employee. You show up. You participate. You do your job, and you make a contribution. But you're not the boss, and it's not your responsibility to run. Now I'm back to being more like a freelancer. I have to hustle. I have to be disciplined. I've never been as good at either of those as I need to be. But now is the time for me to step up. Among other reasons, I said I was leaving choir to make music, and by George I had better have something to show for it soon!

I love my band most, but I'm having fun writing and playing solo songs as well. Catch me at the open mic night at the Heartwood Cafe on June 24th?